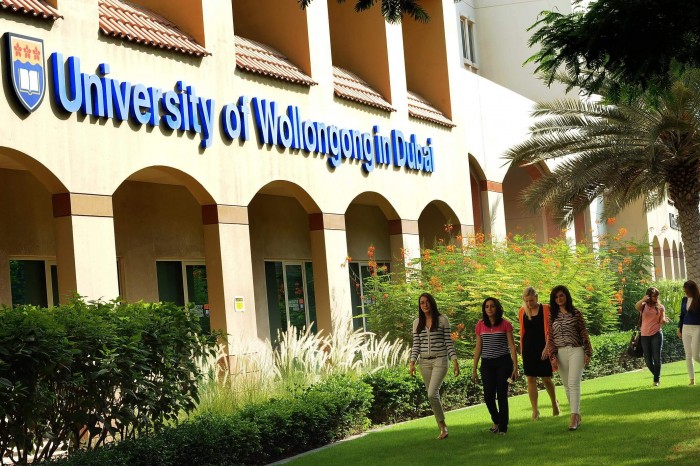 The number of choices for students studying abroad in the United Arab Emirates continues to grow. When the Dubai International Academic City (DIAC) was established in 2007, it consisted of 10 universities and 2,500 students. Today, the sprawling, 18 million square-foot campus features 27 institutions of higher learning, and more than 20,000 students from 125 countries.

The DIAC bills itself as “the world’s largest free zone for postgraduate education,” and “the premier destination for higher education in the region.” Twenty-one of the 37 international branch universities operating in the UAE are within the DIAC complex. These institutions represent 10 countries, more than can be found at any other site in the world.

British Universities
Institutions based in the United Kingdom pioneered international education in Dubai. Heriot-Watt University was the first foreign school established at the DIAC. Middlesex University-Dubai offers graduate and postgraduate degree programs to more than 1,300 students from 60 countries. The Manchester Business School has MBS, MBA, and DBA programs. Branches of the University of Exeter and the University of Bradford also operate at the DIAC.

American Universities
The Hult Business School in the United States has been ranked as the 27th-best business school in the world. Its Dubai campus provides undergraduate, master’s, and MBA degrees. In addition, Michigan State University, a nonprofit research institution offering master’s programs; and the British Columbia-based Canada International College have branches at the DIAC.

Australian Universities
Schools from Australia include a branch of the University of Wollongong, considered one of the world’s best postgraduate institutions; the S.P. Jain School of Global Management, rated among the top 10 business schools in India; and the SAE Institute, the largest worldwide private college for audio and film production. Also, there are Cambridge College International, which awards vocational diplomas in management and marketing; and the Murdoch University International Study Centre.

Other Universities
The DIAC features four India-based institutions: Amity and Manipal universities, the Institute of Management Technology, and BITS Pilani (an engineering school). Representing Europe are the Saint Petersburg State University of Engineering and Economics, one of the oldest and largest schools in Russia; and the ESMOD French Fashion Institute, based in Paris.

UAE-based schools at the DIAC are the British University in Dubai (the first research-based postgraduate school in the Middle East), committed to teaching and researching technological innovations; American University in the Emirates, licensed by the UAE government; and Imam Malik College.

International Students
Students from other countries wishing to study in the UAE must first be enrolled at a licensed university in this Middle Eastern nation. The universities’ administrative staffs help their international pupils apply to the government for one-year student residence visas. This document may be renewed annually, so long as a student is enrolled full time and receives passing grades.

Undergraduates must be 25 years of age or younger, but there are no age restrictions for graduate students. Visa applicants must show “proof of funds” to qualify. Getting a job while studying in the UAE is forbidden. Prospective international students should contact the Dubai Technology and Media Free Zone Authority at the DIAC.

International interest in the UAE began after the discovery of the region’s vast oil fields spurred rapid economic growth. Dubai’s pleasant climate and renowned modern architecture draw visitors from around the globe. The availability of acclaimed institutions of higher education add to the nation’s appeal. According to the widely recognized QS World University Rankings, the UAE is home to some of the best universities in the Gulf region.